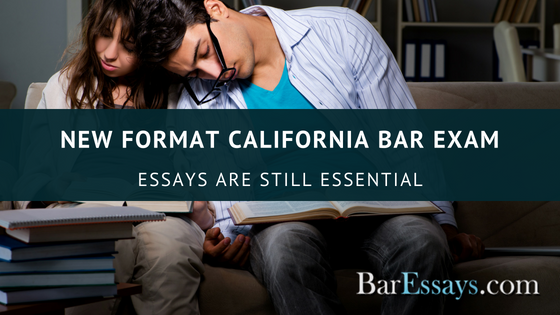 With the new format and modified percentages, many test takers have sought clarity on whether they should focus more on the MBE than previous exams, as the section is now worth 17% more than before.

This has led to some students neglecting study of the California Bar Exam essays – at their peril – under the belief that a high enough MBE score will pass the exam by itself.

After the results of the July 2017 exam were released, BarEssays received score reports from a large number of students who followed this flawed MBE-only strategy.

In fact, we received a disproportionate amount of score reports from students who did exceptionally well on the MBE portion of the exam but failed nearly every California Bar Exam essay.

It is very easy to fall into the trap of neglecting to practice the essays under the belief that the MBE will get you over the finish line by itself.

This is a huge mistake.

We know that practicing essays is painful. But it’s a necessary pain.

As we noted in our earlier blog post, BarEssays recommends that you practice California Bar Exam essays on a daily basis beginning the first week of bar review studies.

Force yourself to write out the essay (even if you need to look up rules open-book).

Eventually, after you practice enough essays and look through the examples, you will have a much better grasp on what you need to do to pass the exam.

Are YOU ready to take the next step to passing your exam the FIRST time?

Welcome to our Blog!

We bring you this blog to provide additional helpful information on approaching the California Bar Exam, specifically the essay portion.

After viewing thousands of high and low scoring essays, we’ve learned a thing or two about how to succeed on the exam!