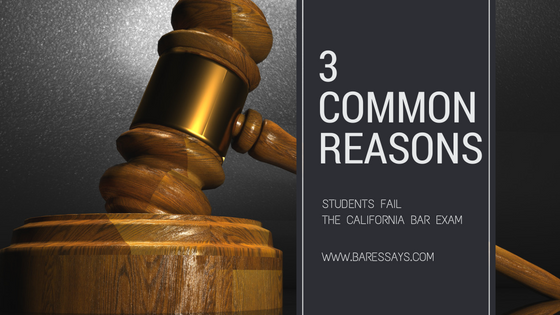 In the process of collecting real graded California Bar Exam essays for more than a decade, BarEssays has viewed score reports and essays from thousands of students who did not pass the exam.

In viewing this material, we have noticed many common elements among students who do not pass, which we intend to share with you through this blog.

Today, we will start with three common reasons that students do not pass the California Bar Exam. 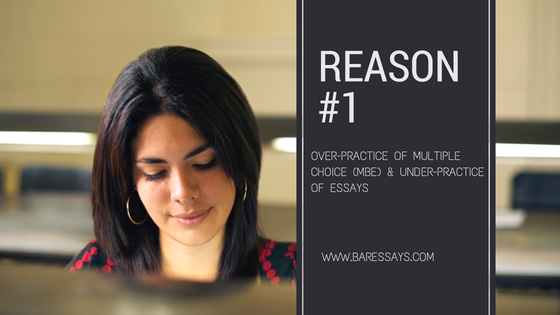 Practicing California Bar Exam essays is a painful exercise. We get it. You don’t want to do it.

To properly practice the essays, you need to print out a question, sit down for an hour, and write everything out.

Particularly at the beginning of bar studies, you might not know the subject as well as you’d like, so it takes great pains to analyze a fact pattern, spot issues, and spit out rule statements for an hour.

In contrast to the essays, practicing the multiple choice (MBE) portion of the California Bar Exam is relatively easy and straightforward.

Unlike the MBE, self-grading your practice Cal Bar essays are an entirely different beast.

Your practice essay will undoubtedly look nothing like the so-called “model” answers provided by review courses – does that mean you will fail?

Due to the more difficult nature of practicing the California Bar Exam essays, many students forego it completely or wait until the end of the study period – to their peril.

We recently received a scoresheet from a student who scored a 1611 scaled MBE (remember that only a 1440 is needed to pass the section) and scored in the top 13 percent of the country!

The student obviously studied immensely for the MBE but did not pay attention to the essays. 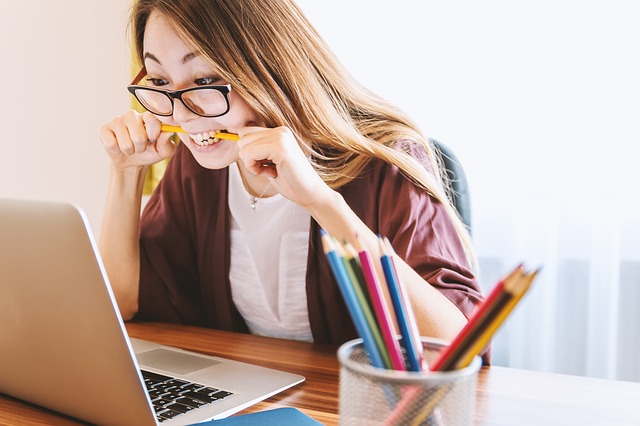 While this might be an extreme example, score sheets with high MBE scores and low essay scores all too common on the California Bar Exam.

How can you prevent an imbalanced study approach?

BarEssays recommends that you practice the essays each and every day beginning the first week of bar study.

That is, print out a past essay in the subject that you are studying for that day and write it out.

It is perfectly ok to do this “open book” at the beginning of bar studies when you haven’t fully memorized the subject areas.

That is not to say you should ignore the MBE. BarEssays recommends practicing at least 30 MBE questions every day.

But you also need to practice writing the essays as soon as possible.

After writing out a practice essay, how do you know if it is comparable to a passing essay?

On BarEssays, you can review high scoring, middle scoring, and low scoring examples to every California Bar Exam essay tested since 2005.

Writing out practice essays daily and self-grading by reviewing the range of real high and low scoring examples to those essays, and thinking about the differences between the scores and essays, will force you to learn the to write a high scoring California Bar Exam essay.

In fact, after reviewing a number of the real graded examples, students often have an A-HA moment, where they “get it” and understand what they need to do to write a high scoring Cal Bar essay.

BarEssays cannot emphasize enough the practice of essays as early as possible in the bar review study period.

We also cannot emphasize enough the importance of self-grading and self-assessment.

No review course grading service can compare to the process of sitting down, comparing your essays to real graded examples, and thinking about what you did right and wrong.

We know that practice and self grading California Bar Exam essays is painful. We know that the practice of MBE questions is less painful.

But don’t go for the less painful route! Dive right into essay practice at the beginning of your bar exam study period and you will be rewarded at the end. 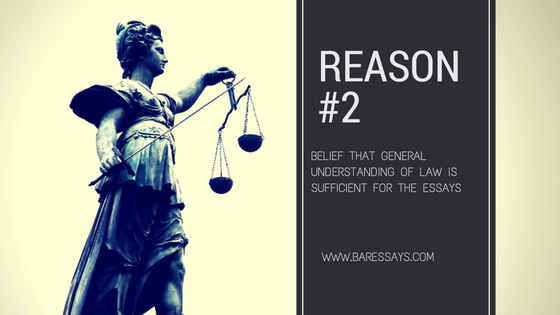 The MBE does not require a detailed and thorough understanding of law to get a high score.

You could have a very good general understanding of each subject and, through process of elimination, figure out the correct MBE answer. Not on the Cal Bar essays.

To score high on the essays, you must have very good rule statements that show a detailed understanding of each subject.

If your rule statements are vague, incorrect, or missing elements, you will lose a lot of points.

Not only will the graders see that you do not know the subject as well as you should, but the grader will also automatically believe that your analysis is off.

Let’s look over one small example from a community property question about transmutation on the July 2017 California Bar Exam.

If you are not aware, transmutation is a process where property changes character between separate and community property.

Here is a rule statement from an essay that scored 55 (a low score):

“Transmutation: Community property can be transmutted into separate property and vice versa.”

Compare this to a rule statement from an essay that scored 75 on the same question (a very high score):

“Transmutation: An agreement between two spouses to change the character of property from CP to SP, or SP to CP, or SP to SP.

Beginning January 1, 1985, transmutation of an asset must be in writing, expressly indicate the intent to transmutate the property, and signed by the party who’s rights are being adversely affected.”

The difference between these two rule statements is obvious.

The high scoring essay demonstrated a vast superior knowledge than the low scoring essay, and this is reflected in the final score.

The high scoring student put in significant time memorizing an excellent rule statement, and showing the grader that the student understands the topic on a detailed level.

Editors tip: if you are not sure what a good or bad rule statement is for a particular topic, compare the high scoring essays in the BarEssays database.

Or, as an alternative, memorize the rule statements on the BarEssays templates. 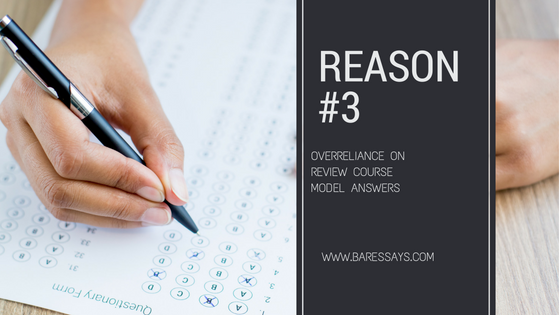 They are produced by employees of a bar exam company, edited, re-edited, sent to additional editors and then published.

Review course model answers look nothing like a real graded high scoring essay, nor should they.

Despite all of the editing, some of the model answers are not even good.

We have viewed so-called model answers from large review courses that miss issues, do not use IRAC, and would not receive a passing score.

Of course, you do not know what score the model would have received because it was never submitted for grading.

At best, they tell you all the issues the review course believes are important, whether or not this is actually correct.

On the other hand, comparing your essay to real high scoring examples, such as those in the BarEssays.com database, will allow you to properly calibrate your progress.

It will also show you what the real California Bar Exam graders value in an answer or, by looking at the low scoring examples, what to avoid.

Some students look at the review course model answers and become so disheartened that they stop practicing essays, gambling instead on the MBE.

You will never write anything like a model answer. And that is OK.

Are YOU ready to take the next step to passing the California Bar Exam?

Welcome to our Blog!

We bring you this blog to provide additional helpful information on approaching the California Bar Exam, specifically the essay portion.

After viewing thousands of high and low scoring essays, we’ve learned a thing or two about how to succeed on the exam!